Investigating the main features of slavery; through the experiences of slaves and transportation

Often one of the most difficult things for students of history and historians to do is understand the ideas, actions, and experiences of people who lived in the past. Often, and as we have been discovering through our exploration into the transatlantic slave trade, the things people thought or did in the past can appear incompatible with the way many people think and act today. The study of slavery is a very good example of this difficulty and to help ourselves overcome this difficulty we will be investigating the main features of slavery and attempting to come up with our own definition of the term 'slavery'.

Activity 3: Slave Resistance - "What would you do?"

The Game PIN is on the on the board.
KAHOOT! QuIZ: Slave Resistance - "WHAT WOULD YOU DO?"

The Experiences of Slaves

The next activity we are going to do will introduce us to the logistics of the slave trade through the experiences of slaves. To achieve this we are going to go on a bit of a gallery walk, that includes both images and videos.

These images relate to different stages of the slave trade; capture, transport, auction, and branding. The images capture how the slaves were exploited and viewed as personal property. These images are valuable to us, as historians, because they demonstrate how those involved in the slave trade understood the value of human life and willingly participated in the exploitation of people for economic gains. 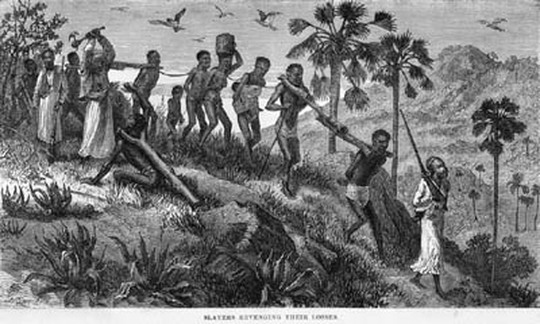 Source 2.2: The first image presents captured slaves being herded to the coast for transport.
2.2: Often young Africans were captured whilst out hunting or were taken from their villages while their families were away. Unfortunately, the families of those captured often had no idea what happened to them. Those who were captured were herded into cages and loaded onto ships.
You can see how those involved treated slaves as personal property from the objects used to capture and restrain them. Often these objects, such as the long wooded neck chains, and weapons were used to subdue and dominate the slaves (see the figure in the left of the image about to strike a slave). 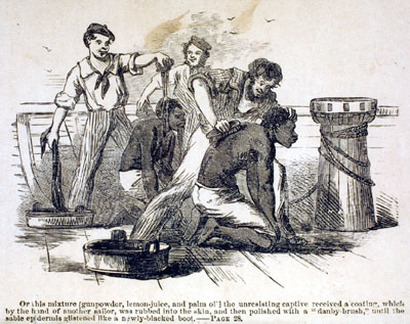 Source 2.3: The second image showcases the importance of presentation before the auction so as to fetch the best price.
2.3: Due to the conditions under which slaves were transported to the Americas (recall the middle passage), the slaves were washed down like animals. The slaves' living quarters on the ship were leaky, ocean-going dungeons. Extremely hot in the summer and shivering cold in the winter. The slaves were left with little to no clothing, blankets, or bedding. Forced to lie in their own urine and excrement, the slaves were also provided with the bare minimum of food and fresh water to keep them alive, so that costs could be kept low and profits maximised. 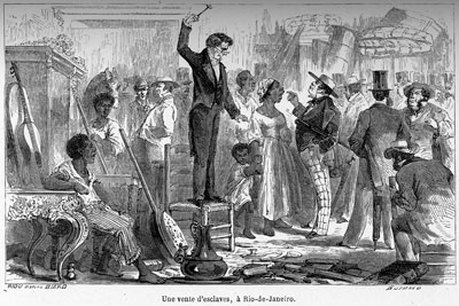 Source 2.4: The consistent flow of auctions continue the absence of human dignity and continues African submission as they are bought and sold to the highest bidder.
2.4: When the slaves arrived in the Americas they were unloaded and prepared for auction. Sores and wounds were covered in tar to conceal them. The slaves were then paraded around like animals before the potential buyers; who then examined the slaves. The interested buyers would thoroughly check the slaves mouth and teeth for illness or disease, feel their muscles and possibly comment upon the slaves ability as a potential breeder; much like someone buying a horse. This entire process was dehumanising and undignified. 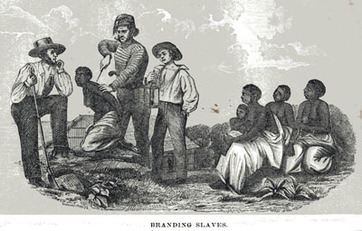 Source 2.5: The final image reflects how individuals want to make sure their assets are protected by “labeling them” with a brand – as if they were livestock.
2.5: The dehumanising process is further reflected in the final image; the branding. Slaves had very little rights, and were considered to be property, not human beings, under the law. For example:

On this gallery walk students will be viewing and analyzing the images and video from the gallery walk. As they explore the dehumanising process of the slave trade students will reflect upon the idea of the time; 'that it was acceptable to own people for personal benefit and gain'. Students will demonstrate how those involved understood the value of human life and how they willingly participated in the exploitation of people for economic gains. 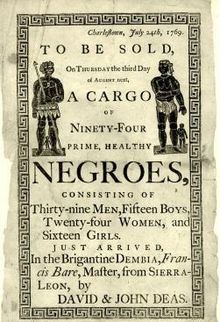 Source 2.6: Handbill advertising the sale of a shipment of slaves, Charlestown, North American, 1769. 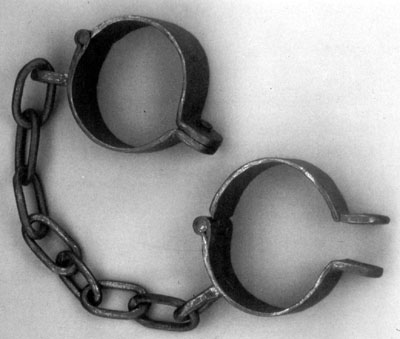 Source 2.7: Shackles, such as these, were used to retrain slaves on their enforced journey to new lands 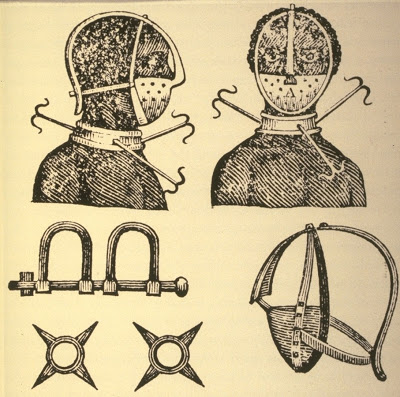 Source 2.8: One of the forms of restraint used for slaves. Three metal prongs around the neck ensure that the slave could not lie down or rest propertly 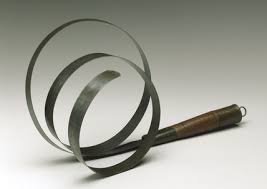 Source 2.10: An illustration from the Illustrated London News, 20 June 1857, showing how slaves were packed together on board slave ships 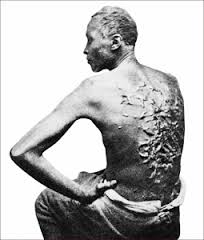 Source 2.11: Scarred back of a slave - the result of a series of brutal whippings 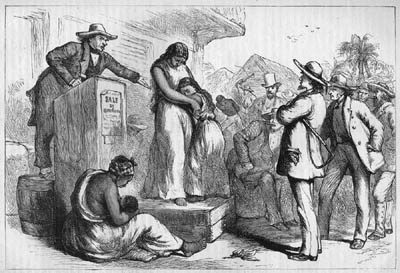